The return of single-driver GT racing to the SRO paddock in the GT America powered by AWS championship has been a resounding success. The series has attracted top-quality racers looking to earn all the glory with a non-stop sprint, flag-to-flag win, in large grids that harken back to the glory days of single-driver GT racing in World Challenge competition. The diverse line-up of GT machinery is nothing short of spectacular and provides all fans with something to cheer for with weekends full of hard-charging competition.

In a few short weeks, GT America powered by AWS competition will return to the track, or rather, the streets, as the series participates in the inaugural Music City Grand Prix in a temporary downtown street circuit in Nashville, Tenn. Before we hear the roar by the riverbanks, let’s take a look back at some of the formative events in this series’ first year of competition.

Luck or the Wright Stuff?

“Luck” might be in his name, but it’s definitely something else that’s helping catapult Charlie Luck to the top of the SRO3 charts in GT America competition. Capturing his first win in front of family at his home track, VIRginia International Raceway, to close this is the perfect lead-in to the mid-season break. The Wright Motorsports driver has stood on the podium in five out of the six races this year, and, having punctuated those podium appearances with a win, we expect to see him continue to show the right stuff in the second half of the competition.

Brendan Iribe and the inception racing team started their dual-series GT3 assault at Texas’ Circuit of the Americas. The sole McLaren entry in both GT World Challenge America and GT America, the team has had a roller-coaster of mixed results in both series, but thanks to two wins on three podium finishes in four completed races, Iribe holds strong just a few points shy of first place in the SRO3 class. Following a busy Summer racing schedule, including an appearance at SRO’s TotalEngergies 24 Hours of Spa, Iribe is one of the drivers that has proven he can deliver in his fight for the inaugural GT America championship.

George Kurtz did his homework over the 2020 winter vacation, and it paid off in spades. Kurtz announced himself a force to be reckoned with at the Sonoma opener by notching the first GT America Pole Position and the first race win including a CrowdStrike Fastest Lap award that put him at the front of the grid for Race 2. He completed the hat trick with a second weekend race win and a bonus CrowdStrike Fastest Lap award for good measure. A few unfortunate racing incidents have derailed his charge but this mid-season break could prove to be as beneficial as his last break.

The remainder of the field are as hungry and determined as the front-runners, with Zelus Motorsport Racing’s Jason Harward slotting in just behind Kurtz. His two-series campaign was made all the more difficult with mechanical setbacks to the platform that warranted less-than ideal grid position. Still, his reclamation of spots during the course of these events has kept in earshot of the top honors in the class. So, too, are the campaigns of Kyle Washington and Jeff Burton, both of whom have been in the points at every race attended so far; a podium or race win can dramatically change their fortunes in the series. Other outliers without full season-to-date credentials include Dmitiri Novikov, CJ Moses, Jason Daskalos, and series regular James Sofronas. Sofronas’ win and podium finish are sure to wet his appetite and make him a more viable contender for the GT3 championship title. 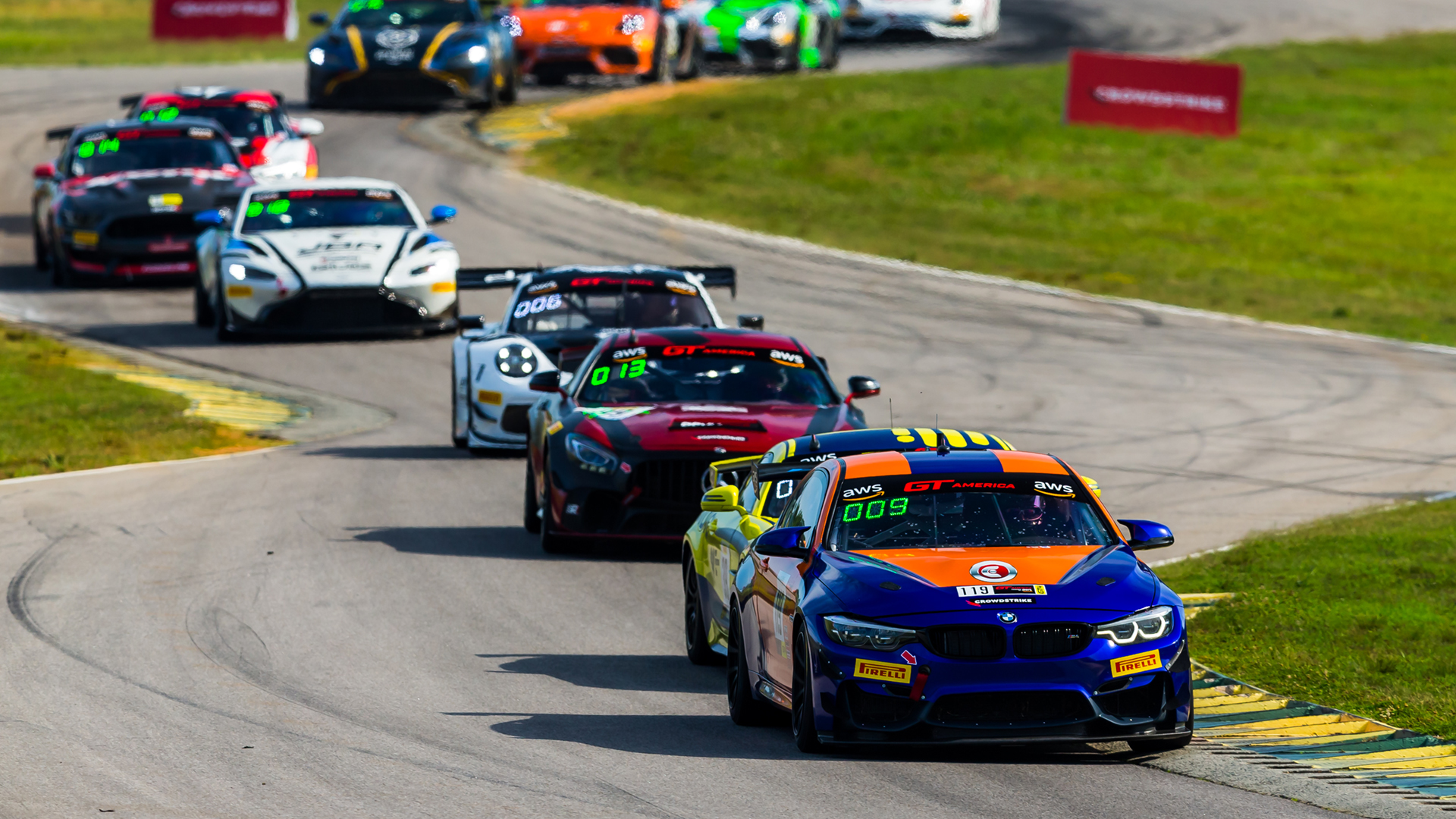 A Sprint to the Finish

Quinlan’s GT4 campaign has been something to behold. In addition to running a dual series program (co-driving in GT4 America) and remaining in the Top 4 in a highly competitive class in that series, Quinlan’s single-driver efforts have seen him on the podium five times in six races, with four of those having him bring home the first-in-class hardware and two of those wins starting from a P1 Qualifying position. Quinlan’s SRO run is a master class in how to run a two-series campaign simultaneously and effectively vie for both championship titles.

In spite of his record, Quinlan can’t let off the literal or proverbial gas pedal as there is a large contingent of drivers looking to make themselves the ones to beat in the second half. Sitting at number two with a bullet is Jason Bell, who seems to have come to grips with his new Aston Martin and in position for race wins. Robb Holland pilots the only American muscle in the group but has finessed his platform enough to take home a race win, a podium, and a handful of excellent qualifying positions in the crowded field.

Chouest, Welch, and Cagnazzi have shown speed and have enough points to keep them within reach of serious contention. Other contenders working out their race strategies for the remainder of the season include Gray Newell, Adam Adelson, Phil Bloom, Elias Sabo and Alain Stad, many of whom are planning to be present for the series-equalizing, never-before-driven street course that’s next on the schedule.

The Wait is Almost Over

GT America powered by AWS returns with a street fight in Music City with the IndyCar series for the inaugural Music City Grand Prix in Nashville, Tenn. on August 6th through 8th. The series rejoins the rest of the SRO family at the National Park of Speed, Wisconsin’s Road America where the second annual GT Parade will take over the streets to kick-off the all-series-on-deck, double-header weekend on August 27th to 29th.

The Sprint series will make its first appearance at the famed Watkins Glen International in New York on September 17th to 19th before pausing the points-charge for an invitational appearance at Florida’s Sebring International Raceway on October 1st through 3rd.

The grand finale will coincide with the remainder of the SRO America championships at the world-renowned Indianapolis Motor Speedway on October 15th to 17th, running in lock-step with the Intercontinental GT Challenge powered by Pirelli’s presentation of the Indianapolis 8 Hour.

Tickets are available for many of the upcoming series weekends. While you’re here, get your tickets and join us for an upcoming race weekend, check out your favorite team and driver points standings, catch up on all the races this year, and stay abreast of the latest GT America news.