Having competed at The Glen in 2019, many GT World Challenge and GT4 America competitors saw the scheduled 2020 events folded into triple-header weekends at other venues due to the severity of the global pandemic’s effects. Now, many of those drivers return with an eager eye pointed toward running the 3.37-mile, 11-turn circuit in the lush greenery of upstate New York’s Seneca Lake region. Experience will definitely be a factor for some competitors, as will the local weather that as of late has been unseasonably hot and characteristically damp.

Expected to defend his lead in the Driver standings this weekend, Charlie Luck is taking on contenders old and new for the SRO3 Championship. The #45 Wright Motorsports Porsche driver will have to hold off a fellow Masters-class contender, Jeff Burton, who has collected five podium appearances in the past six races in his #191 Rearden Racing Lamborghini to land the second place spot with a bullet. Also closing in on the Driver’s championship contention circle is Zelus Motorsports driver Jason Harward; he will continue to find pace and hopefully a spot on the podium in the #88 Lamborghini Huracan GT3 as he navigates his twin-series championship bid.

Also running a dual-series campaign, George Kurtz and his #04 DXDT Racing Mercedes-AMG GT3 unit are scheduled to appear on the Watkins Glen ticket, as are Brendan Iribe and the inception racing team; Iribe’s run at The Glen can count as a sort of homecoming as the McLaren 720-S GT3 driver once called the New York area “home.”

Recent addition to the paddock Andy Wilzoch hopes to repeat and extend his Round 10 win into a streak; the Flying Lizard Motorsports pilot is will return to his #460 Porsche 911.1 GT3 R. Former TC America alum CJ Moses (#58 DXDT Racing Mercedes-AMG) also enters the Watkins Glen competition to continue his quest for racing hardware.

John Megrue, who made his season debut at Road America, will pilot the #10 TR3 Racing Lamborghini Huracan GT3. Another late-season entry into the SRO3 category, and another SRO3 Masters competitor to shake up and contest the podium sub-class. 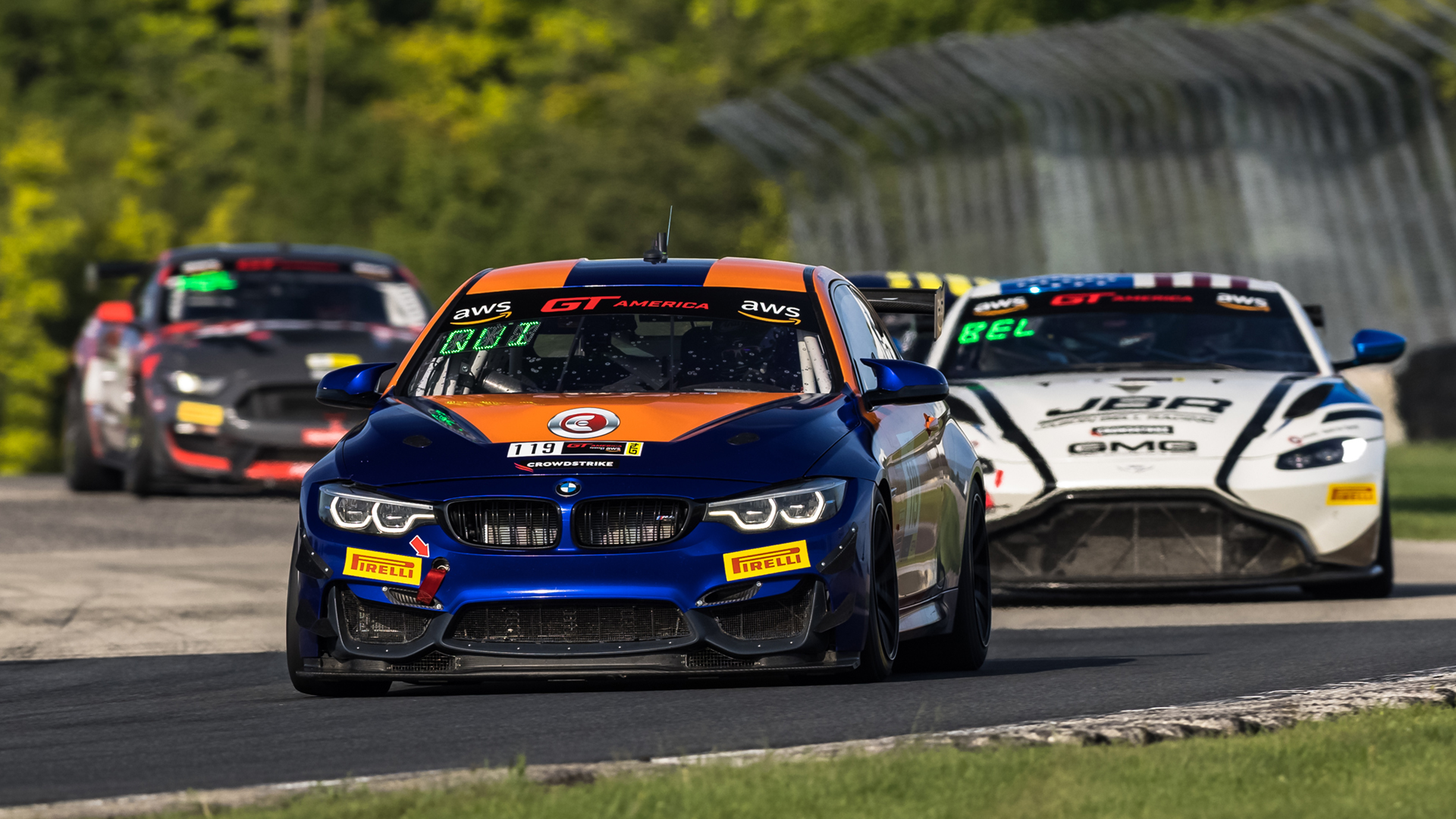 The 2019 Watkins Glen weekend marked the last time a GT4 single-driver competition was run by SRO America at The Glen. With the GT4 single-driver class now competing under the GT America umbrella, the upcoming weekend will mark a return to that familiar fan-favorite type of racing.

Sean Quinlan and the Stephen Cameron Racing team have figured out the secret to consistent race-winning, and they are guarding that secret tightly. The #119 BMW M4 GT4 driver currently sits first in the Driver standings and has signed on to maintain that lead for the Watkins Glen double-header weekend.

Jason Bell has put in the work all season and the payoff is showing in dividends. Bell and his #2 Aston Martin Vantage AMR GT4 are now second in the driver standings and continually closing. Look for him to make another honest run at the hardware this weekend.

Robb Holland might currently be down one spot, but he’s not even close to being out. Sitting at just three points behind Bell, watch for Holland to take his #99 Rotek Racing Ford Mustang GT4 as far up the mountain as he can in the quest for the Championship title.

Two drivers have a single race win to their names so far this season - both Alex Welch and Ross Chouest; see if either or both can repeat the feat this weekend at The Glen.

Adam Adelson will continue his GT4-class campaign in the #120 Porsche 718 Cayman GT4 CS MR for Premier Racing, looking to notch more points in his full-season tally. So too will Gray Newell, driving the #25 Heart of Racing Aston Martin Vantage AMR GT4 in another two-series, GT4-based campaign, and Alain Stad, competing in the #619 Stephen Cameron Racing Porsche 718 Cayman Clubsport.

GT America powered by AWS competitors suit up and hit the track for official practice on Friday, September 17th, at 9:20 am EDT. Catch each race of the double-header weekend streaming live on the GTWorld YouTube channel, with audio simulcasts on SiriusXM Satellite Radio channel 392 (992 on the web app). Local fans can buy General Admission tickets for the weekend starting at $20; tickets are available at https://bit.ly/gttheglen